This exhibit examines the probability that more invasive species are on the way to the Chesapeake Bay. Sea surface temperatures and sea levels are rising worldwide. As the temperature increases, seawater will expand which will accelerate sea level rise. Eventually, barriers that are now protecting the mouth of the bay will become submerged or just washed away. When this happens, the salinity and temperature in the bay will increase to the point where animals like volitan lionfish will find it a nice home year-round. Currently, the invasion of lionfish has halted at the Outer Banks in North Carolina, but for how long?

Animals like European green crab which already affect the Atlantic shores of Maryland will be able to reside in the upper limits of the bay. And others like the blackbar soldierfish, native to the southwest Atlantic Ocean will make their way north and become established. This will be considered a range extension as opposed to an invasion, but what will the ecological impacts be on native bay inhabitants?

What can we do now to prepare and protect the bay from future invaders?

Only a select few of these species may be exhibit at any time. 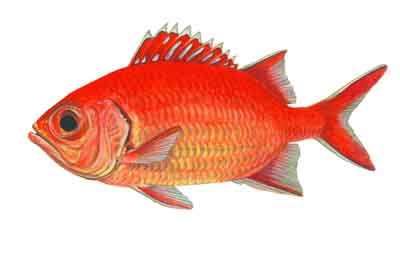 
Habitat: The Myripristis jacobus can be located in a marine environment within a subtropical climate. They live in reef-associated waters. A nocturnal species aggregating around coral reefs and deeper rocky reefs.

Coloration: Body reddish above, paling to silvery below. Spinous dorsal fin with red and white markings. Edges of all fins are white.

Reproduction: These fish use external fertilization on the days that follow a full moon.

Maximum length (in inches or feet): 10 in

Predators: They hide from predators in dark recesses but just in case, their preopercle spines near the gill-opening are venomous. 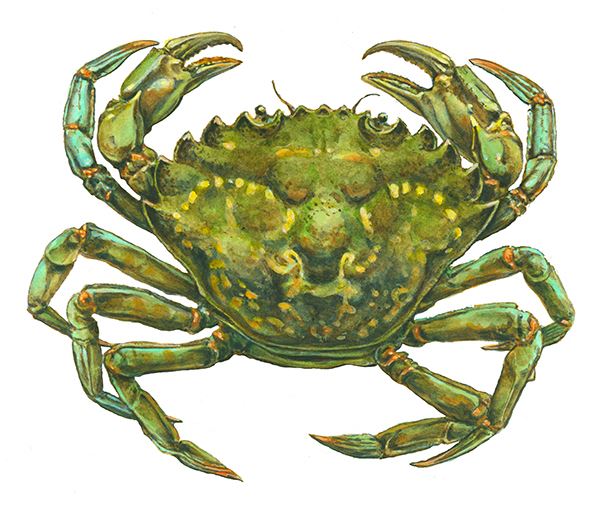 
Distribution: The European green crab is native to the Atlantic coast of Europe and northern Africa, from Norway and the British Isles south to Mauritania. The European green crab's feeding habits and tolerance of a wide variety of environmental conditions has enabled it to occupy numerous coastal communities outside its native range, including South Africa, Australia, Japan, and both coasts of North America.

Key characteristics for distinction: Most distinguishing feature separating it from other Pacific Northwest crabs is the array of five spines on either side of the eyes on the front end of the carapace.

Reproduction: In the North Sea, mating takes place after the females molt from April to November, but mainly from June to October. In the Baltic Sea, male European green crabs molt between May and June. Males molt more often and grow larger than females, and typically mate with females smaller than themselves. When mating, the male embraces the newly molted female in order to protect her from predation or cannibalism. This type of guarding behavior may also be a means to ensure that the male is the sole partner of the female's brood. Because of their thicker shells and stronger claws, male red European green crabs compete more successfully for mates than green males. Female carries the eggs underneath until hatching.

Maximum length (in inches or feet): 4 in

Importance to humans: used in biological studies; considered an invasive species in some areas 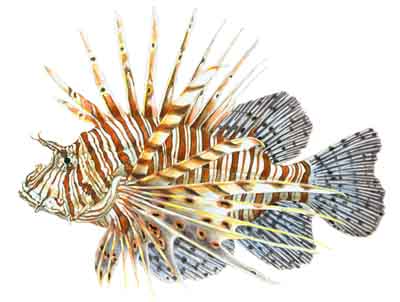 Distribution: Lionfish are native throughout the Indo-Pacific Region, where their numbers are controlled by predation, competition, and disease. Lionfish have invaded the Atlantic coast. First spotted in Biscayne Bay after the 1992 release, they are now well established throughout the Caribbean to Cape Hatteras, North Carolina. As the ocean warms they will continue their relentless march up the coast. They were introduced into the Atlantic when a beachfront aquarium near Biscayne Bay was destroyed during Hurricane Andrew in 1992. Hobbyists are also believed to release pet lionfish, contributing to the spread.

Reproduction: Capable of reproducing year-round, create 2 million eggs in one spawning, and are resistant to parasites.

Predators: In the Atlantic lionfish have few natural predators

Fun Fact: “Ptertois” comes from the Greek word “pteroeis” meaning “feathered” or “winged” “Volitans” is Latin for “flying” or “hovering”