Yes! Seahorses are native to the Chesapeake Bay. Among preferred habitats of these delightful animals are the once extensive beds of submerged grasses in higher salinity bay waters. Come peer between blades of eel grass and turtle grass to find our seahorses and their close cousins the pipefish. The abandoned pier piling is coated in barnacles and sea grapes, a perfect place for butterflyfish to graze.

Submerged aquatic vegetation (SAV) provides a critical habitat for other animals as well. Molting blue crab ("peelers") shelter here to avoid predation in their softened state; bay scallops sit quietly, filtering the waters - only when disturbed by potential predators do they gallop away, propelled by the clamping together of their two shells; whole schools of juvenile fish seek respite, waiting for a day when they can swim freely in the open waters as larger predators themselves.

Only a select few of these species are on exhibit at any time, though all are representative of Hippocampus Haven habitats. 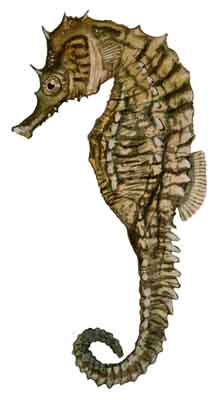 Habitat: The lined seahorse occurs at depths from 2-230 feet (.5-70 m) and is often observed clinging to aquatic vegetation including mangroves, seagrasses, sponges, corals, and floating sargassum. Those that reside with sargassum often have protuberances and fleshy tabs that aid in camouflage. This seahorse is also found associated with man-made structures. Adults may be associated with vegetation or swimming freely in the midwater while newborn and juvenile lined seahorses tend to swim close to the surface of the water. During the winter months, this species moves into deeper waters.

Key characteristics for distinction: The large and hardy lined seahorse is deep-chested and robust. Instead of scales, this seahorse has skin that is stretched tightly over a bony armor that is arranged as a series of rings. At the end of the tubular snouth is a small, toothless mouth. The gills are tufted and lobe-like with gill openings restricted to the upper border of the operculum. The pelvic and anal fins are absent, the dorsal fin is spineless, and the tail is prehensile. The coronet is variable and low and appears as a triangular wedge or ridge-like with sharp edges or spines. The first, third, fifth, seventh and eleventh trunk rings are enlarged which distinguishes it from other species of seahorses that typically have enlarged first, fourth, seventh, and eleventh trunk rings.

Coloration: The basic color of the lined seahorse varies from gray, orange, brown, yellow and red to black while brown specimens tend to be paler on their front side. The body often has a characteristic pattern of white lines following the neck contour from which this fish gets its common name of "lined seahorse". Small white dots are located on the tail along with darker or paler saddles across the back.

Feeding habits/specializations: Seahorses lack teeth however they do have a long snout to accommodate their diet of small shrimp, very small fish, plants, and plankton which they swallow whole. Seahorses are slow-moving so rather than chasing down prey, they use their elongated snout as a pipette to suck in small crustaceans including shrimp. Other prey items include amphipods, copepods, polychaetes, and gastropods.

Reproduction: Seahorses are sexually dimorphic, with the presence of a brood pouch at the base of the abdomen of males the most obvious structural difference. Males also have proportionally longer tails than do the females. Mating with a single partner for an entire season or lifetime. The courtship behaviors are complex with partners displaying changes in color becoming pale to whitish. The male inflates his pouch prior to pursing the female, signaling his readiness to mate. The female then transfers between 250-650 eggs to the brood pouch of the male which he then promptly seals and fertilizes the eggs. The brood pouch protects the developing embryos and provides them with oxygen through a capillary network. Development in the brood pouch is 20-21 days followed by hatching. The hatched embryos are carried within the pouch until they can actively swim. The father seahorse holds fast to an object with his tail, then bends backward and forward rapidly, opening the pouch to let a young seahorse out. These motions are repeated until the pouch is emptied.

Predators: Although lined seahorses are well-camouflaged among aquatic vegetation, mobility is limited making this species somewhat vulnerable to predation. Larger fishes prey on adults and juveniles including dolphinfish, tuna, and sharks. In captive situations, parental males have been documented as cannibalizing small numbers of their own young.

Importance to humans: Seahorses are not targeted in fisheries in the western Atlantic Ocean, however they are a targeted fish in other regions where they are commonly traded for ornamental display, aquarium fishes, and traditional Chinese medicine. It is also commonly taken as bycatch in the shrimp trawl and other fisheries off of Florida, Mexico, Central America, and South America. It is also susceptible to habitat degradation due to coastal development and marine pollution.

Conservation status: The lined seahorse is listed by the World Conservation Union (IUCN) Red List as "Vulnerable" due primarily to indirect evidence that numbers are continuing to decline which has raised concern.

Fun fact: Seahorses mate with a single partner for an entire season or a lifetime. 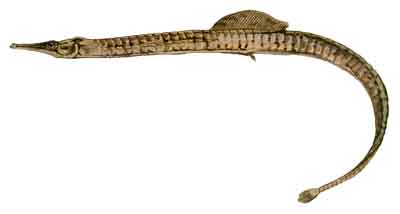 Coloration: vary in color from pale tan to brown with mottled tannish and brown markings.

Reproduction: Spawn between April-October with a peak in May-June. The female lays her eggs into the male’s brood pouch where they are fertilized. The male incubates the eggs for approximately two weeks before they hatch. He then released a cloud of tiny, fully-formed pipefish from his pouch into the water.

Maximum length (in inches or feet): 13 in

Predators: Believed to have few predators due to their ability to camouflage themselves within grass beds. Pipefish imitate blades of grass by aligning themselves vertically within grass beds and swaying softly. Maybe preyed upon by bass, gars, perch, drums and weakfish.

Coloration: vary in color from whitish to brownish, with tan to nearly black markings

Feeding habits/specializations: prey mostly on small crustaceans such as shrimps, amphipods and crabs

Reproduction: Ovoviviparous. The male carries the eggs in a brood pouch which is found under the tail. Unlike most seahorses, pipefishes of the genus Syngnathus incubate eggs in an inverted pouch. Fertilization occurs after the female transfers the eggs, and incubation lasts until embryos develop into juveniles. Studies suggest that reproduction peaks in late spring and early summer.

Predators: Little information exists about predators of the chain pipefish, but the ability of the species to camouflage itself between seagrass blades and among clumps of algae reduces predation. Still, individuals are likely preyed upon by other fishes and birds.