Our largest aquarium, this exhibit depicts the myriad life that thrives around large man-made structures installed around the Chesapeake Bay. Hard surfaces exposed to natural waters often team with life, serving as a stable place to attach and steady against shifting tides and currents. Sessile (attached) life attracts larger free-swimming animals like game fish, marine mammals and sea turtles - there to feed on the rich life that abounds.

Our bridges span the deep, open waters of the bay. Oceangoing ships follow the channels created in a time before the Susquehanna River succumbed to rising seas. Massive jetties and bulkheads attempt to stave off rising seas or prevent shoreline erosion. Despite human influences, the bay continues to demonstrate amazing resilience.

Only a select few of these species are on exhibit at any time, though all are representative of Beneath Our Bridges habitats.

Distribution: Found in western Atlantic from Massachusetts to Florida and throughout Gulf of Mexico

Key characteristics for distinction: Chin with 3-5 pairs of barbells (small). Dorsal fin notched deeply with 10 spines in anterior and 1 spine and 26-30 soft rays in posterior portion. The upper dorsal side typically has many spots brassy in color that take on the appearance of wavy bars; this becomes less distinct in larger fish

Reproduction: spawning can occur at age 2-3 in continental shelf waters from Summer to Winter. Migrate offshore to spawn. Late summer young travel to lower salinity and freshwater then travel back to high salinity with adults. 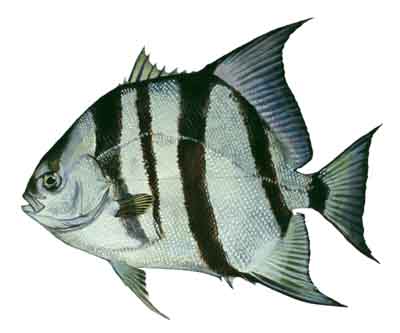 Coloration: Silver in color with irregular black vertical bands that will fade as the fish ages.

Reproduction: Spawning season runs from May to September on inner shelf off the US coast. Single female may release up to one million eggs each season. Eggs are buoyant and small. Bands develop after time. Juveniles reside in very shallow water and will often swim at an angle which disguises them as fallen dead leaves or mangrove pods. 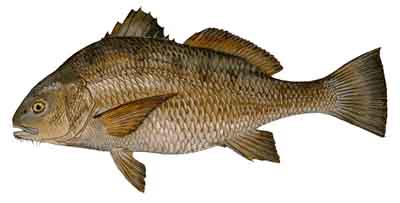 Predators: sharks; juveniles preyed upon by seatrouts, jacks and other large fish. 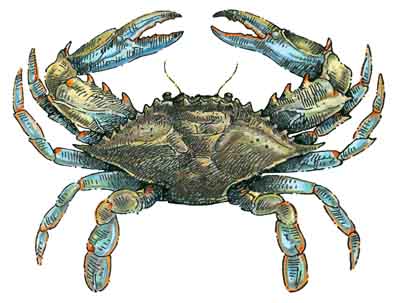 
Growth stages of a blue crab 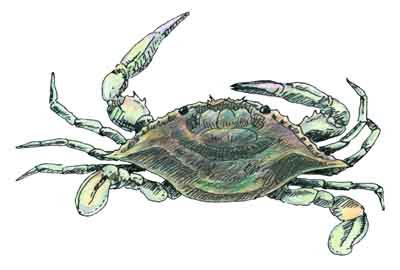 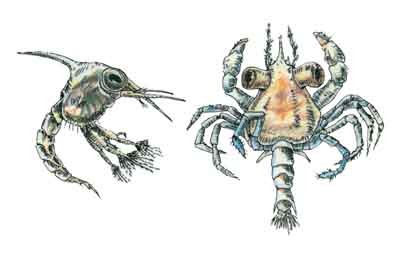 Distribution: Native to western edge of Atlantic Ocean from Nova Scotia to Agentina and around entire coast of the Gulf of Mexico. Estuaries along east coasts of North and South America. Also been seen in coastal waters of Holland and Denmark. It has been introduced (via transfer in ballast water on ships) to Japanese and European waters.

Key characteristics for distinction: Five pairs of legs, the first pair is modified as pinchers (claws) while the last four pairs are walking legs (the last pair paddle-shaped to aide in swimming). The carapace is drawn out on each side into a large spine. Fully grown, the spine may be as large as 8 inches wide. To help identify against other crab species in the area, count the number of frontal teeth on the carapace. C. sapidus has four frontal teeth while C. ornatus has six. Crabs molt to grow.

Coloration: Back of crab is dark or brownish green. Abdomen and lower legs are white. Claws are various shades of blue except females have red-tipped claws.

Feeding habits/specializations: Omnivore – bivalves, annelids, small fish, plants and almost any other food item it can find along the bottom including carrion and other waste. Blue crabs are scavengers and help “clean up” the water by feeding on most things.

Reproduction: Females only mate one in their lifetime. Mating occurs from May through October. Males will cradle a soft-shelled female for days while he looks for a protected area for her final molt. Once she has molted, the pair mate. After mating, the females travel to southern part of Chesapeake using the tides to migrate to areas of higher salinity. The eggs are fertilized with sperm stored from the only mating (which could be from months to almost a year ago). Up to 2 million eggs may be produced in a single brood while one female can produce of 8,000,000 eggs in a lifetime. The eggs appear as an orange mass on her pleopods for about two weeks before being released between November and December. The eggs hatch and float into the mouth of the bay for about four to five weeks until they make their way back into the bay.

Maximum length (in inches or feet): Carapace width of 9.1 in

Importance to humans: Valuable fishery/commercial. Aide in “cleaning up” the water due to their feeding habits.

Conservation status: safe but under management plans throughout the range of the species. Watched carefully as a major commercial fishery.

Key characteristics for distinction: The body of the red drum is elongate with a slightly arched back and sloping head. It has a blunt snout with a large sub-terminal mouth similar to most species in the Sciaenidae family. There are two dorsal fins, the first of which has ten hard spines and the second with one hard spine and numerous soft rays. The caudal fin is slightly concave. The red drum can be distinguished from the closely related black drum (Pogonias cromis) by its lack of barbels.

Coloration: The red drum is usually a copper reddish color. Coloration can also range from a deep dark copper to an almost silvery sheen. The ventral side is usually a lighter color to almost white. Red drums have a distinctive black spot near the base of the tail. One spot is most common however some individuals exhibit several spots.

Feeding habits/specializations: crustaceans, mollusks and fishes. Females can produce one-half to two million eggs per season with each egg measuring approximately 1.0mm in diameter. Eggs hatch at approximately 28-30 hours after spawning resulting in larvae that are about 6-8 mm standard length.

Maximum length (in inches or feet): 61 in

Predators: The main predator of the red drum is humans. Other predators include birds of prey including ospreys, as well as larger fishes. The black tail spot is thought to be used as mechanism to confuse predators into attacking the tail instead of the head.

Fun fact: Drums are known to make a characteristic drumming noise during spawning. 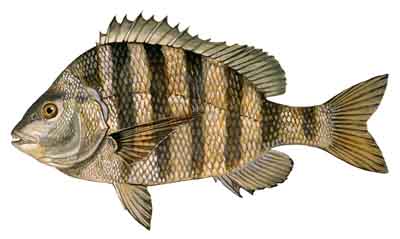 Feeding habits/specializations: Teeth of the sheepshead include well-defined incisors, molars, and grinders. At the front of the jaw are the incisor-like teeth. The molars are arranged in three rows in the upper jaw and two rows in the lower jaw. Heavy, strong teeth are necessary for crushing and grinding the shelled animals that are prey for this fish. Feeding on invertebrates, small vertebrates and occasional plant material.

Reproduction: Adults migrate to offshore waters to spawn, later returning to nearshore waters and estuaries. Spawning frequency ranges from once a day to once every 20 days. Little is known regarding spawning behavior. Depending upon their condition, females may produce from 1,100 to 250,000 eggs per spawning event. One study determined that those fishes found closer to shore averaged 11,000 eggs per spawning event while those offshore averaged 87,000 eggs per batch. The buoyant eggs are approximately 0.8mm in diameter, hatching 28 hours following fertilization at 23°C.

Predators: sharks and other large fish

Conservation status: not endangered or vulnerable; once over-harvested but management actions have aided recovery. 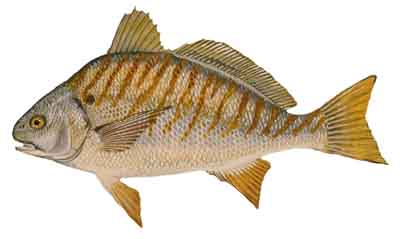 Habitat: shallow waters, often near pilings and jetties. Schools just below the water’s surface. Has been collected from all depths and bottom types. Juveniles often move into freshwater rivers.

Key characteristics for distinction: Deep notch in the dorsal fin. High, rounded back that slopes down to a small head. No teeth in the lower jaw. Forked tail fin.

Reproduction: Spawns over the continental shelf from late September-March. After spawning, adults may stay offshore. Tiny larvae enter the Bay and move to freshwater shallows and tidal creeks, where they stay and grow throughout the summer.

Habitat: Marine; freshwater; brackish; demersal; anadromous. Inhabit coastal waters and are commonly found in bays but may enter rivers in the spring to spawn. Some populations are landlocked.

Coloration: streamlined, silvery body marked with longitudinal dark stripes running from behind the gills to the base of the tail.

Reproduction: Striped bass spawn in fresh water, and although they have been successfully adapted to freshwater habitat, they naturally spend their adult lives in saltwater. Spawning occurs from April to early June in the Chesapeake Bay's tidal tributaries. During spawning season, several males court a single female, who lays her eggs in fresh or brackish water near the shore. After spawning, adults swim downstream to the Bay. Some continue on to the ocean. Eggs hatch in two to three days, after which larvae move slowly downstream. 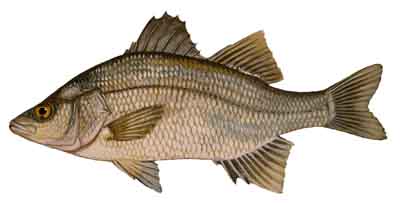 Reproduction: Semi-anadromous because it does not travel all the way from ocean to spawning grounds in freshwater rivers; begins spawning runs when water temperatures increase in late March.